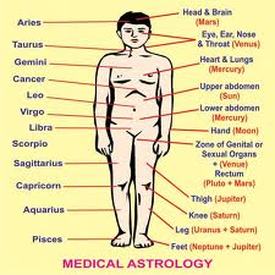 Medical science can diagnose the disease only when it occurs. Prevention from diseases is possible by taking preventive measures in time. It is only astrology, numerology and palmistry that can warn about a pending disease. The medical astrology which is a branch of astrology is one of the various facets of the divine science of astrology for the benefit of the mankind and it is fully competent to answer our questions regarding health. Occasional physical disabilities and disturbances occur due to the astrological factors in time and space.  According to Ayurvedic beliefs diseases are caused due to vitiation of vata, pitta and kapha doshas in human body. In which vata is wind element, pitta is fire element and kapha is the element that interrelates the earth and the water elements. These doshas are quiet positional in the body. Vata dosha resides in the lower part of the body ( lower limb and genitals), pitta resides in the middle (digestive system) while kapha dosa resides in the upper part of the body (chest and head). Each of these regions of the body is also governed by external factors such as nakshatra and planets.

The life of living creatures, particularly that of humans, is governed by the planetary influences, which can be read from the horoscope and Gochara. The effect of planets on each sign, house and on each other plays an important role on the health in general and on particular organs. This effect will be felt during particular Dasa, Bhukti (periods, sub-periods) of concerned planets. The signs in the zodiac, the planets and the houses considered from moon sign have their own peculiarities pertaining to certain organs. To study the health aspect the significance of sign, house and the planets should be super imposed and synchronized. Using Astrology it is possible to identify the diseases a person is having, or susceptible to in the future. Once a person get to know that he is susceptible to certain kind of diseases, he/she could take precautions and preventive measures so as to either prevent the disease from manifesting or to reduce the intensity of a disease if it becomes inevitable.